Jan
12
by tom_mai78101 at 1:54 PM (1,619 Views / 0 Likes) 0 Comments
The news: Microsoft has created an automated system to detect sexual predators trying to groom children online. The tool, code-named Project Artemis, is designed to spot patterns of communication in conversations.

Rating: On the basis of words and patterns of speech, the system assigns a rating for the likelihood that one of the participants is trying to groom the other. Companies implementing the technique can set a score (for example, 8 out of 10) above which any flagged conversations are sent to a human moderator to review. The moderators could potentially identify imminent threats and report them to law enforcement. It would also provide child protection experts with more information on how pedophiles operate online. Microsoft has been using these techniques for several years for its own products, including the Xbox platform and Skype, the company’s chief digital safety officer, Courtney Gregoire, said in a blog post.

How does it work? Microsoft hasn’t explained the precise words or patterns the tool hunts for—doing so could potentially cause predators to adjust their behavior to try to mask their activities. The tool is available free for companies that provide online chat functions, through a nonprofit called Thorn, which builds technology products to defend children from sexual abuse....
Continue reading...
Jan 12, 2020

Jan
12
by tom_mai78101 at 1:53 PM (1,616 Views / 0 Likes) 0 Comments
Nutrient-rich golden rice—a genetically-modified, amber-hued crop—has passed a rigorous biosafety assessment in the Philippines, where it may soon be distributed to combat the country’s widespread vitamin A deficiency. The plant is engineered to be packed with beta-carotene, an orange pigment that the body converts into the essential nutrient vitamin A.

Declared “as safe as conventional rice” by the Department of Agriculture in December, golden rice can now be legally consumed and processed. The stamp of approval makes it the first GMO crop created to combat a public health issue in a lower-income country, reports Steve Baragona for Voice of America.

In a statement, congressperson Sharon Garin of the Phillipines' House of Representatives praised the development as “a victory for science, agriculture and all Filipinos,” according to Charissa Luci-Atienza at the Manila Bulletin.

The Philippines is one of several lower-income countries with widespread vitamin A deficiency, a dietary condition that can cause blindness and hamstring the immune system. More than half a million children die from the deficiency each year, in large part because they don’t...
Continue reading...
Jan 8, 2020

General Almost Everyone at CollegeHumor Lost Their Jobs Today

Jan
08
by tom_mai78101 at 9:33 PM (2,056 Views / 0 Likes) 0 Comments
Layoffs have come for another online comedy outlet — one that has managed to survive on the internet despite challenges for nearly 20 years. Multiple sources have confirmed to Vulture that CollegeHumor was hit with a big round of layoffs today, which a rep for its parent company, IAC, has confirmed. About 100 employees in New York and Los Angeles have lost their jobs, with Bloomberg noting that “around five to ten people” will remain at the company as it restructures under the supervision of CCO Sam Reich, who explained the news on Twitter:

So, bad news – with a twist. IAC, our parent company, has made the difficult decision to no longer finance us. Today, 100+ brilliant people lost their jobs, some of whom are my dear, dear friends. Hire them.

The twist, however, is that IAC has agreed to let me run with the company myself. In words that I’m sure are as surreal to read as they are to type, I will soon become the new majority owner of CH Media. Of course, I can’t keep it going like you’re used to. While we were on the way to becoming profitable, we were nonetheless losing money — and I myself have no money to be able to lose.

Health Impossible Pork, made from plants

Impossible Pork debuts at tech conference CES in Las Vegas this week, and attendees will be able to taste the new product. Like the Impossible Burger, the plant-based pork is made with soy protein and is designed to look, taste and cook like real meat.

Others will be able to try a sausage version of the product when it arrives at 139 Burger King restaurants later this month. Some locations in Georgia, Michigan, Illinois, New Mexico and Alabama will serve a croissant breakfast sandwich featuring the Impossible Sausage for a limited time.

Much of the hype surrounding plant-based meat has been focused on beef substitutes.
But pork could be the next big thing because of the industry's ambitions in Asia, where African Swine Fever has devastated the pork supply. There's also an increasing demand for meat alternatives in the United States.

US News Punta Ventana, one of Puerto Rico's natural wonders, has been destroyed by an earthquake 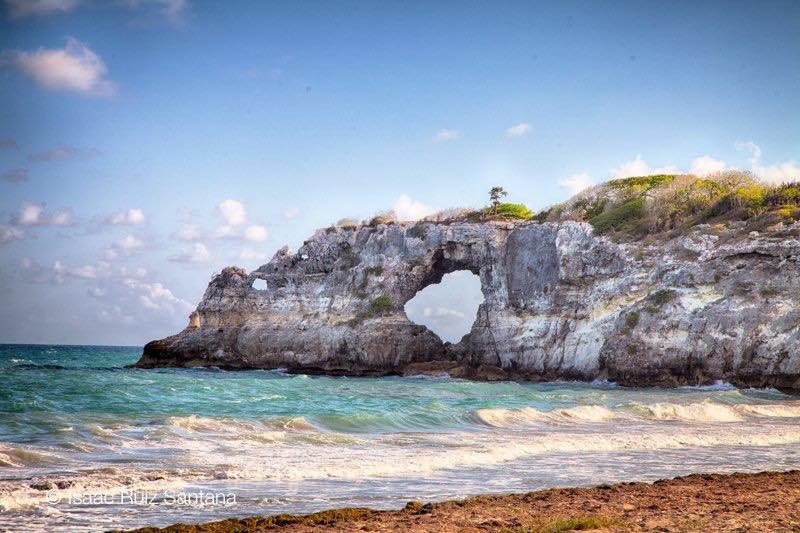 by tom_mai78101 at 8:15 PM (1,703 Views / 0 Likes) 0 Comments
(CNN) — A famous tourist landmark and one of Puerto Rico's most cherished natural wonders collapsed on Monday after an earthquake shook the island, Nelson Torres Yordan, the mayor of Guaynilla, confirmed.

Punta Ventana, which translates to "Window Point," was a stone arch shaped like a round window located in Guayanilla along the southern coast. The rock formation was one of the island's most iconic treasures and major tourist attractions.

A 5.8 magnitude earthquake struck the island on Monday, wiping out the natural structure.

The UPRM Meteorological Laboratory shared a photo on Twitter of Punta Ventana before and after the earthquake, showing where the soaring arch once stood before its tragic collapse.

US News Parking Meters Across NYC Not Accepting Credit Cards, Were Never Programmed To Work In 2020

The Department of Transportation said the software had an “established end date” of Jan. 1, 2020 and was never updated by the vendor.

Drivers can still pay with cash or by using credit cards via the ParkNYC app.

The DOT said crews were out working on the issue Thursday night, but there’s no word on how long it will take to fix the tens of thousands of meters.

The agency will discuss what to do about possible ticketed drivers with the city’s department of finance.

Jan
01
by tom_mai78101 at 7:31 PM (1,971 Views / 0 Likes) 0 Comments
Disposable plastic plates, cups, straws and other products were banned in France as of Wednesday as part of legislative measures coming into effect with the New Year. The ban applies to some of the most common polluting products but does not concern plastic packing material.

The ban aims to put an end to some of the most recognisable single-use products for anyone familiar with summer picnics – not to mention the littered parks, trails and beaches that can result.

Plastic plates, cups, cutlery, drinking straws all fall under the ban, as do cotton buds used for cleaning and hygiene.

“The most important thing is that the ban concerns emblematic products,” says Flore Berlingen, director of the campaign group Zero Waste France.

“It’s not just symbolic, because these are also objects we’re used to seeing littered all around: they’re light, they’re easy to carry pretty much anywhere, and we often see them in nature.”

Consumers may continue to see such products for a six-month period that has been allowed for stocks of previously manufactured products to deplete.

Jan
01
by tom_mai78101 at 7:23 PM (2,084 Views / 0 Likes) 1 Comments
Bushfires ravaging Australia have now killed at least 17 people and created a plume of smoke thought to be present over an area greater than that of Europe.

The government has deployed military ships and Navy ships and military aircraft were bringing water, food and fuel to towns where supplies were depleted and roads were cut off by the fires.

Authorities confirmed three bodies were found on Wednesday at Lake Conjola on the south coast of New South Wales. More than 175 homes have been destroyed in the region.

Antti Lipponen, a physicist and research scientist at the Finnish Meteorological Institute, said the plume was 14 times the size of Japan, and superimposing it over a map of Europe, showed it would stretch from Iceland to Turkey.

Jan
01
by tom_mai78101 at 7:22 PM (1,740 Views / 0 Likes) 0 Comments
Tinder has been described as a “hook-up app” — but new research suggests that it is not particularly effective at facilitating one-night stands. The study, published in Evolutionary Psychological Science, indicates that Tinder is not causing an increase in short-term sexual encounters.

Researchers from the Norwegian University of Science and Technology were interested in how differences in motivations for using Tinder were related to sexual encounters.

“A prior student, Ernst Botnen (one of the co-authors of the paper) originally came up with the idea of collecting data on Tinder use and other picture-based mobile dating applications,” explained study author Trond Viggo Grøntvedt.

“Maybe the most interesting question was how individual differences in sexual strategies, such as preference for short-term mating, affected the use of this new dating opportunity. We wondered if Tinder was just another mating arena for short-term oriented people, or whether Tinder represented a different mating arena for people who did not succeed in more traditional dating arenas?”

“In addition, there was some public concerns regarding the increase in STD’s and a possible link to the use of dating apps. So how many people actually are successful in acquiring new partners? Is this public concern justified?”...
Continue reading...
Jan 1, 2020

Jan
01
by tom_mai78101 at 7:20 PM (1,777 Views / 0 Likes) 0 Comments
It's hard to walk down the kitchenware aisle in a Canadian store without noticing the "BPA-free" labels on plastic bottles and containers.

Consumers usually assume these labels mean products are safer, or better, because they do not contain the harmful chemical bisphenol A (BPA).

BPA is used to manufacture polycarbonate, the hard, clear plastic from which some bottles and other food containers are made. When foods are in direct contact with the plastic, small amounts of BPA may migrate into those foods, prompting increased public pressure to move away from its use.

But new research suggests the chemicals now used as substitutes for BPA, mainly other bisphenols, may have negative health impacts similar to those caused by BPA. Health and environmental advocates are raising questions about the safety of those substitutes.

And the record of what impact such products may have is confused, because there is little information for consumers on what substances are being used to replace BPA.