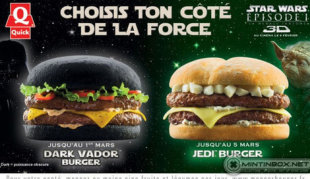 How much force needs to be with you to eat a black burger? The Belgian fast food chain Quick is celebrating the upcoming "Phantom Menace 3D" movie premiere by launching a line of "Star Wars"-themed burgers. The burgers will debut in Quick restaurants throughout France on January 31, just before the film's February release in the country. Despite being in French, the ads for the burgers have sent the entire Internet into a tailspin of equal parts repulsion and curiosity.

Quick's limited-edition burgers come in three flavors. There's the Dark Burger—a double cheeseburger on a seeded bun with some kind of creamy mayo spread. Then there's the Jedi Burger, another double-patty cheeseburger, this time inspired by the cryptic genius Yoda. Only few are enlightened enough to know whether those white pellets peaking out from under the bun are cheese curds or marshmallows.

In the Shadows, Lurking.

Im guessing the first burger is burnt, since its on the dark side.

Staff member
Of course my stomach is growling and I decide to go to TH.net first before making food then I see this.

I want one so bad now!
"Only death awaits you all, but do not fear. For is it through death that a new spirit energy is born. Soon, you will live again as a part of me." - Sephiroth

Staff member
Never seen a burnt burger that black before. I wondered how it tastes?

All aboard the xPass Express!

This is one of the most tasteful, amazing "burger" I have ever seen.

Maybe the Dark Burger bread is like the Swedish bread Paltbröd, which get its black color from the blood content. While I do not actually believe this, it would certainly add to the sinister nature of the Sith.
D