Staff member
Hatchery Havoc​
A new generation Base Control with emphasis on micro and tactics, NOT mindless massing of armies​
​
​
​
​
A custom SCII map made by Siretu and Bloodcount.​
Recommended player count: 4+​
Mode: FFA​
Map Version: 1.0 (fresh out of beta)​
​
I Win/Loss mechanics​
II Core Gameplay mechanics​
III Gameplay enhancement mechanics ​
IV Terrain features​
V Final word​
​
​
I Win/Loss mechanics​
These mechanics are relatively simple: ​
​
In order to win you must control all the hatcheries on the map before the timer (25 minutes) expires. Regardless of the outcome when the game is over the players can regame without having to leave the current game. ​
​
​
​
The mode is FFA, but after you kill an opponent, his last hatchery will remain his and he will be allied with you. That way no player will be out of the combat until the very end of the game.​
II Core Gameplay Mechanics​
The hatcheries on the map give you supply cap. From them you can train queens. The queens summon the rest of your army, they are your most important unit. The queens will degenerate mana at a rate of -0.5 per second. This means that the longer a queen isn’t in action the weaker she will become.​
​
The same can be said for her summonings, however they lose 1 hit point per second. Upon killing a unit they restore their health to maximum.​
III Gameplay Enhancement Mechanics ​
1 The queen would be rather worthless after running out of energy. In order to restore her usefulness she has 2 other abilities which make her useful and give her more strategic depth. ​
•The first one is the Internal Balance. In exchange for 50 hitpoints the queen will restore her energy to maximum. ​
​
2 Upon killing an enemy unit the queen’s summonlings not only restore their health but they gain the ability (for a small amount of minerals) to morph into a stronger version of theirs. The stronger version still loses hitpoints but it is significantly stronger. 2 of the morphed units merge into a different unit type. Although the merge is costly the newly formed unit is very strong and has a special role in the game. ​
​
•The Roach for example has insane movement speed and it can chase down and wear out and chase down any unit. It is tanky and armored, with enough transfusion it is nearly impossible to kill.​
​
​
3 Every hatchery can be upgraded into lair and hive. It’s upgraded forms have a lot more hitpoints than its predecessor. They are very good for fortifying key positions on the map. The Lair and Hive summon stronger queens with stronger spells. Their summonings are stronger than the Hatchery level queens. Upgraded forms also give more supply.​
4 If a hatchery is not taken by a player it will turn into a hive after 5 minutes.​
5 The map has AI.​
​
​
IV Terrain Features​ 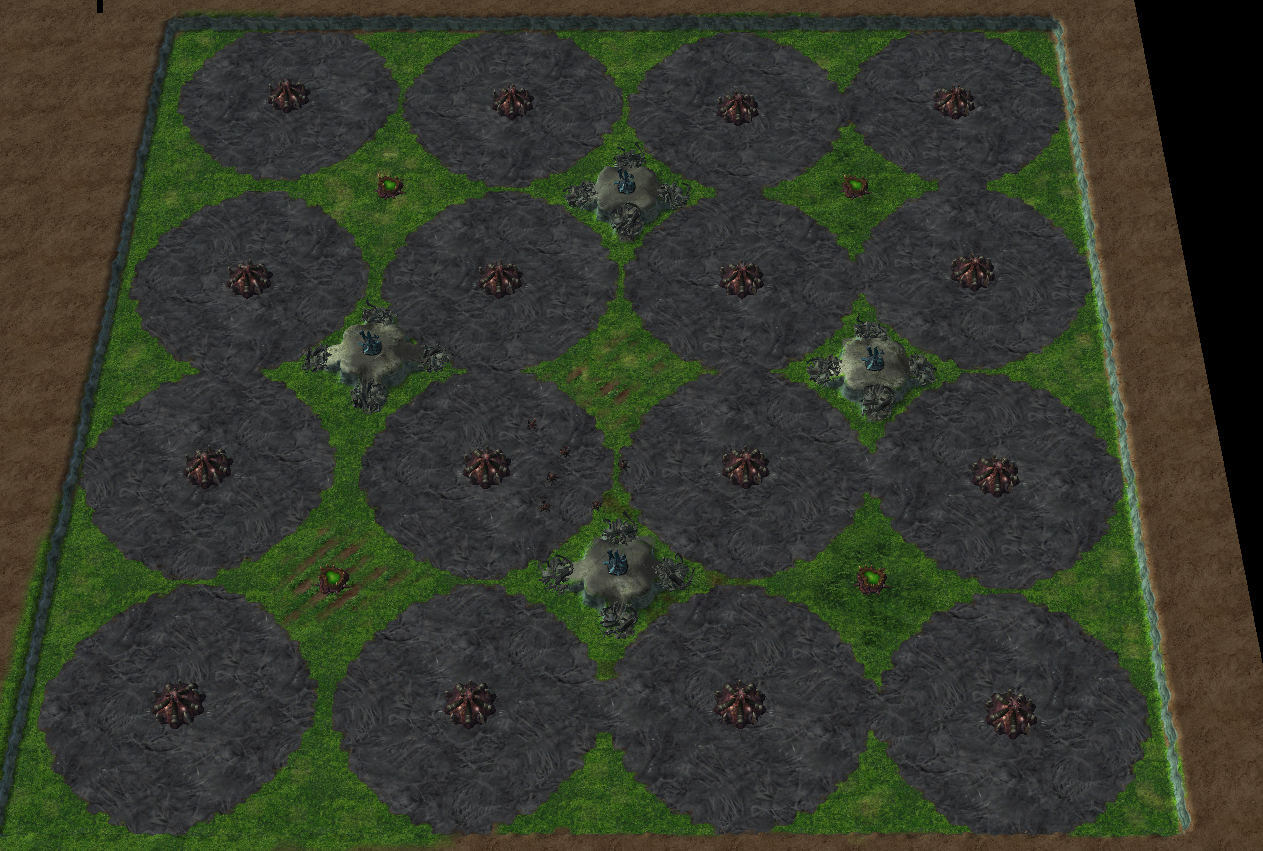 ​
The map is open, there are hardly any choke points, due to the lack of AoE. There are a couple of places of interest that players will want to control.​
​
​
1 Restoration Pools. Remember warcraft III’s health and mana fountains ? They have been left out of any maps in SCII... can’t imagine why. Well, we are the first ones to fix this mistake because they are making a comeback in Hatchery Havoc! They give a small health and mana regeneration to all units in their range. They are the only way to heal your units without losing minerals. ​
​
There is a total of 4 pools on the map. The regeneration matches the summonlings deregeneration, so a summonling’s life will stay the same if they’re close to a restoration pool.​
​
2 Xel’Naga watch towers- there is 4 of them, each one of them is on highground and the ramps are blocked by destructible rocks (500 hp) The strategic value that the Xel’Naga towers give on a small map like this is very big, that is why we feel that the player must first invest time into capturing the tower before being able to use it to plan his offence/defence. ​
​
V Final word​
We would love hear your feedback and watch your replays. Thank you for reading and enjoy the map.​
​
​
^_^

I tried to play the game against a computer (as there wasnt anyone joining the game).
And I lost in a matter of seconds. It apears that all the bases where controlled by the computer from the start, which resultet in me getting overrun by 4 queens and a HUGE load of swarmlings when I only had 10.

A nice concept though, I remember playing something like this in Wc3 - which wasnt very wellbalanced... I'd love to see a well done version from you guys

Staff member
Well what you are playing shouldn't be the latest version of the map... (Erik remove the one we have set up for testing)

ahh Yeah, just noticed that the terrain did not match Well I'll check it out when it gets released if I have the time (going on vecation next week so I'm not 100% sure that I will have the time to do it)

Staff member
Ah yeah. I'll remove the old version later today. The A.I is very hard though. I think my record is like 3 minutes. It's hard to survive longer than that. The A.I is pretty simple, but very effective.
I like likes.

Hehe ok, the reliefs me, I just thought that I was very very bad :b (clearly I am, but that's not the point )

Staff member
The AI is pretty hard to beat... I am almost convinced to add a "survive against the AI" mode to the game...
^_^

hah Yeah, it is as little rough to say the least Yeah, that could be an option in game - maybe have some friends playing together against the computer?

Staff member
Thanks to Dave for fixing the final bug(that we know of). The map is now published on EU.
I like likes.

any way of publishing it on NA?

Staff member
I'll see if I can publish it on NA tonight.
I like likes.

Looking forward to playing it on the SEA server... PEOPLE STILL PLAY ON THAT SERVER