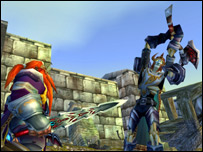 The makers of World of Warcraft are locked in a legal battle with a firm that has produced a tool to automate many actions in the virtual world.

Blizzard is suing Michael Donnelly, the creator of the MMO Glider program, which performs key tasks in the game automatically, such as fighting.

Both sides have submitted legal summaries to a court in Arizona.

Blizzard says Glide is a software bot which infringes the company's copyright and potentially damages the game.

More than 10 million people around the world play Warcraft.
Click to expand...

Ten million? Last time I checked it was only six. Quick, into the bunkers, WoW is spreading faster than Christianity!

This is opinion based.
However, I don't feel he should get sued, hes not doing anything illegal...

I thought MMORPG should be fun during leveling, farming, and battling

> hes not doing anything illegal...

Have you read the article completely?


Article said:
Blizzard argued that Michael Donnelly's tool also infringed the End User License Agreement that all parties have to adhere to when playing the game.
Click to expand...

EDIT:
Or wait... it's still an argument

Well he's not the one botting now is he?
T

That's like saying a dictator is not the one killing all of a country's civilians, it is the dictator's military, and therefore all the blame should be placed on them, not the dictator himself.

Because none of us are as cruel as all of us.

A dictator gives orders. The guy that made the bot simple made it, doesn't use it, doesn't force others to use it, it's simply there. It is legal what he is doing (I've seen similar cases) as he himself isn't doing. All he would need to do is make his own ToS or something similar saying that they won't use it for botting in WoW and only for learning purposes or something like that.
The Revolution Will Not Be Posted
Dare To Be Different
Wc3 is not dead.
Bartuc for President 2024!
​

imo a game should only have parts a bot can't do or its crap (mb with some exeptions). Thats why I don't play WoW: endles farming.
H

Well I think this is how it works. Some chinese farmer comapnies buy their gold from botters so if the bot goes so will some of the online gold and people who make a living off wow.

Really old news, bout a year and a half ago, I used to play WoW, and near the end of my 2 year spree, I botted a lot. Then I got my account banned on my birthday, haha And he was being served papers, and sued back then still.

Staff member
Yeah, it's been around for a long time though.
I don't see where blizzard would win, though.

Think about it, his bot does not modify anything at all with the WoW Client. It simply pushes buttons based on things it "sees". The ToS says you are not allowed to change or deform packets sent to and from the WoW server, he is doing nothing of the such.

All and all, I think he will end up winning against Blizzard. After all, if private servers can win legal battles with blizzard, I don't see why a bot programmer wouldn't.
H

The difference is he's using it to make money , by selling it . The players who use it then sell the gold =O. Im pretty it states somewhere the stuff in WoW isn't to be sold for cash in real life.
You must log in or register to reply here.
Share:
Facebook Twitter Reddit Pinterest Tumblr WhatsApp Email Link
General chit-chat
Help Users Options